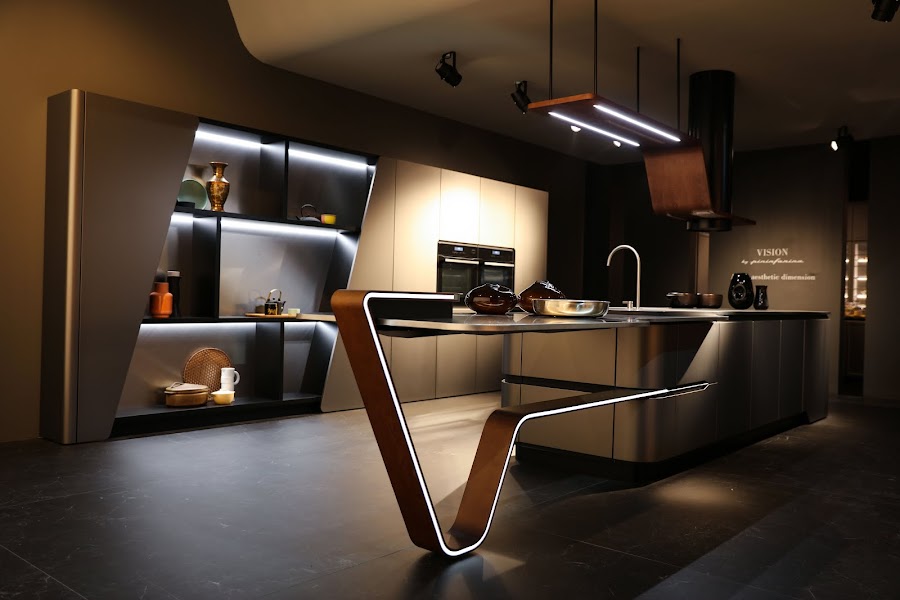 Mussels in the high pressure steamer

For next week we`ve to deliver 3 Snaidero kitchens in the UK. One of those clients has bought a high pressure steamer (Snaidero kitchen project 703 in Camberley/Surrey). For this client we`ve made the video I have embedded below (my apologies for my English, I`m working on it).

Mussels in the high pressure steamer.

The builders of the house of project 703 are running a little behind. That is why the installation of that kitchen is planned later this year.

The opening of the new showroom in Tehran, in early January 2016, marks an important opportunity for Snaidero for exporting to Iran its world-renowned design and high quality. In addition, the initiative is a further step in the international development strategy that will increasingly involve both the retail and contract sectors in the forthcoming months.

Snaidero had already anticipated the trend over a year ago by selecting potential partners in Iran with which to invest in a new showroom, with the aim of making it Tehran's most prestigious kitchen and furniture retail shop. Such an important opening required a rather long time for deciding on the location – situated on the city's main street – and constructing the structure.

The exclusive showroom CASAITALIA showcases the best of ‘Made in Italy’ products and Snaidero features as an exclusive kitchen dealer, occupying roughly 400 m2 out of the total 1,000 m2 showroom area. The following four models are featured: Ola 25 Limited Edition (Design Pininfarina), Idea (Design Pininfarina), Gioconda (Iosa Ghini Design) and Orange (Design Michele Marcon). The Zareipour family, with which Snaidero collaborated for the opening of this new point of sale, is present in Italy with Continental S.r.l. based in Udine, the Italian headquarters of CASAITALIA.

"Our decision to start an important collaboration over a year ago with a major Italo-Iranian partner with which we were already acquainted for some time’ – commented Edi Snaidero, the Chairman and Managing Director of Snaidero – ‘underlines our far-sightedness in striking important partnerships, even before we'd heard of the 14 July 2015 agreement. We were therefore able to anticipate the future and are ready in time for the opening of this new point of sale situated in Jordan Boulevard, one of Tehran's luxury roads, where Snaidero will be able to optimally export its kitchens – icons of design and authentic Italian craftsmanship".

How to steam rice in the high pressure steamer

As I am selling more and more kitchens in the UK more clients are asking for English spoken video`s. This time a video about how to steam rice in the high pressure steamer.

I have asked Frans to do this video for me, because I did the Dutch version earlier myself already. Frans is a client and he has a Snaidero Time kitchen at home. The video is added to my playlist cooking in the Snaidero kitchen.

With the rice we`ve combined this time Pak Soy and Dorade.

History of the brand Snaidero

As I`m selling more and more kitchens abroad I`m trying to post an English written post sometimes too. This time the first part about the history of the brand Snaidero: the beginning (click here for the second part).

Soon after a devastating war for Europe and the Friuli region, few had the strength and courage to look beyond the rubble. Even fewer where able to plan for the future. Amongst these post-war pioneers we have Rino Snaidero, an uncompromising native of Friuli. This young man decided to take up the challenge and take what became the gamble of a lifetime.

A gamble not based on luck, but rather on intelligence and manual skill: on the virtue of work, in other words. And so it was that in January 1946 Rino did for the first time what he would continue to do throughout his long life: breaking with tradition by innovating. He broke with the family tradition and chose to become a craftsman and furniture maker. He did this by setting up and opening his workshop behind his father's house, in Deveacco, near Majano (Province of Udine). Significantly, on the 9th March of the same year he got married, thus also beginning his own family.

At this point Rino was struck by the desire to create jobs and stable and peaceful prospects for his fellow countrymen, and a future for his children. Without running the risk – which in those days was almost inevitable – of seeing them leave (both fellow countrymen and children) to take the difficult road of emigration. In this way, business and family interests coincided.

Rino employed sixteen people in his first workshop. In the beginning the Company only made bedroom furniture, and later also windows for the new homes being built, taking advantage of the opportunities offered by the “Ina Casa” program. Soon the workshop was no longer big enough. A new building was erected on the site of his father Francesco's vegetable garden, and in here were housed new machines that allowed him to further refine the manufacturing process. A process which, from craft beginnings, now became decidedly more industrial by the introduction of serialization. A house was rented in Deveacco di Majano (Udine), and was used to house the first permanent display of the Company's products.

In 1959, a crucial year in the Company's history and development, Rino made three very important decisions. He set up “Rino Snaidero & C.”, transforming what was essentially still just a workshop into a properly structured business. He settled once and for all on the manufacture of kitchen furniture exclusively, optimising and serialising the production lines in an industrial way. He invested his savings in a hectare of land in Majano (Udine), in what was then called viale Europa Unita and is now named viale Rino Snaidero Cavaliere del Lavoro (Cavaliere del Lavoro - literally Knight of Industry - is an Italian decoration given to important figures in industry). It was here, later, on 9th January 1960, that the Company's new industrial premises were opened.

If it is true that the virtues of an entrepreneur and pioneer must include foresight as well as courage, Rino Snaidero quickly understood the changes taking place and the evolving times and tastes. Just a few years after the war he realised that bedroom furniture was no longer a growth area. It was the first American kitchens, the new modular designs he had glimpsed in magazines, which then captured his imagination. The first domestic appliances were already revolutionising the conventional order of the kitchen space. The kitchen, thought Rino, will now have to be reorganised according to a new order and a new anthropological ideal. This challenge therefore came to represent for him, the newest, most interesting and most lucrative commercial and research frontier to dedicate himself to from then on.

Finally. Besides English blogposts I have started to make English spoken video`s too (like the embedded video above). Unfortunately my English is not perfect, my apologies for that.

Below the English spoken version of the same video. And sorry that my English is not perfect, but I`m working on it...