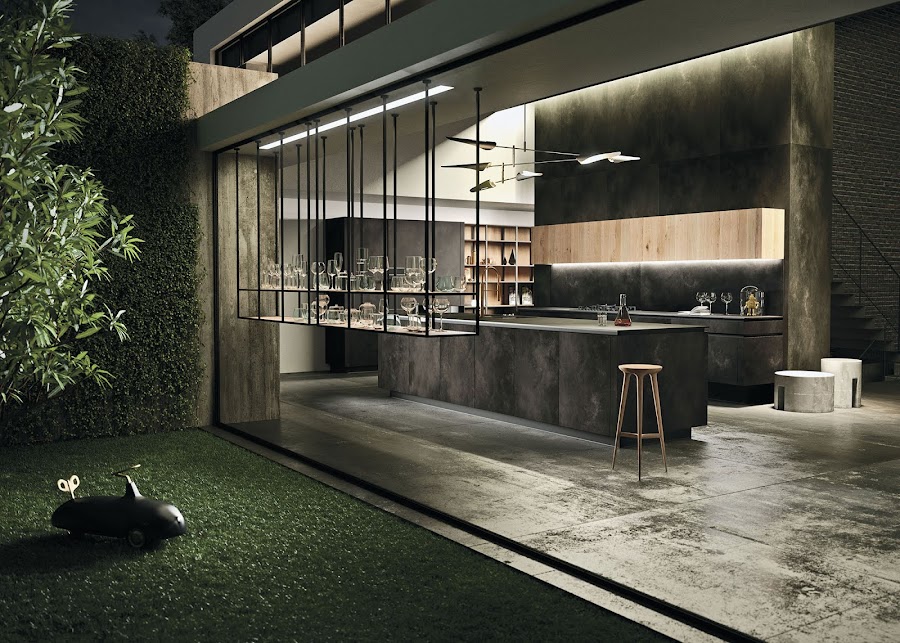 History of the brand Snaidero; part 3


At the end of the 1960s, the Company's visionary founder felt the need for a change in the manufacturing philosophy. The need to re-establish and consolidate the Company's relationship with the big names of Italian industrial design, which were astounding the world and creating a trend for everything “Made in Italy”. The innovative research being carried out and associated practical consequences for manufacture also meant that a wider audience was opening up. It would no longer be about a restricted circle of manufacturers catering to an elite customer base. The time had come to test the validity of those theoretical and practical advances on a wider and now more demanding public, "hungry" for new things and expressive and functional modernity.

During the same period, in 1973, Rino Snaidero also decided to extend his factory in Majano. Once completed in 1978, the expanded factory reached the size of one hundred thousand square metres, organically divided between the different manufacturing departments, warehouses, canteen and social areas. A "population" of one thousand three hundred people worked there. In addition the expanding Company opened three new sales subsidiaries: in Paris, London and Zurich.

Who designed the new and futuristic factory in Majano (picture above)? In 1975 Rino Snaidero, who in the meantime had been invested as a Knight of Industry, entrusted Angelo Mangiarotti – professor at the Institute of Technology in Chicago and renowned architect in Milan – with the design of the new Company headquarters. The courageous and enterprising entrepreneur and the celebrated and visionary architect immediately struck up a productive relationship based on mutual professional admiration and human charm. During the 1970s the architect was working on a series of mushroom-shaped blown glass vases: a design solution that was adopted on a construction level for the design of the new and imposing headquarters for Snaidero. The bold design solution proposed by Mangiarotti was resolved by the innovative choice of building the facade from fibreglass attached to a reinforced concrete structure supported by four columns. The result was a magnificent building with extremely refined materials and support structures, characterised by slightly protruding elliptical windows that became round in the curvature of the corners.

However, whilst the building site was still under development the unthinkable happened. All of Friuli and therefore also Majano (which was only five kilometres from the epicentre) was struck by a terrible earthquake on 6th May 1976. Rino was in Canada. He came back immediately, to his family, to his workers and to his factories. The latter he found destroyed, the former not much better off. The earthquake killed many and devastated homes and businesses. Rino did not lose hope however, and as if faced with a dramatic new post-war scenario, he motivated everyone to find courage and rebuild: “Do not give up, difficulties should be faced with determination...”. He then added: “When these big disasters strike of course we all need a corner to sleep in, but it is essential to rebuild the workplaces immediately and then the houses. If there is no work, there is little need for houses”.

And then from words he went straight into action. He immediately had the surviving machinery moved to the factory in Portogruaro, and from there, just ten days after the terrible earthquake, full production began once again. The contracts were saved and so, above all, was the future of his workers. Straight after this he called for the architect Angelo Mangiarotti, asking him to promptly continue with the works at the devastated building site. The new complex was completed in 1977 and featured avant-garde building solutions designed to withstand earthquakes.

However, Rino Snaidero did not want to miss the opportunity represented by his meeting with Angelo Mangiarotti to put forward another matter entirely. He asked him to design a kitchen, which would later become known as the “Cruscotto”, and which was the pure expression of a profound research in terms of materials and an equally advanced study of ergonomics. It immediately became the centre of attention, with a prototype of the new kitchen accepted and exhibited straight away at the MoMa in New York.

Subsequently in the 1980s the architect Giovanni Offredi became the main designer at Snaidero, with his excellent taste and sensitivity he was one of the best designers of his time. Over the years his pencil produced many refined and beautiful designs that became both public and critical successes. The splendid new “Krios”, “Kalia”, “Pragma”, “Elementi” and “Contralto” kitchens were thus created, all to varying degrees highly innovative and technological.

The kitchen on the picture above is model Kalia by the way. A timeless design what a bit looks like the S18 kitchen I`m selling nowadays (see embedded video below).